Every once in a while, I like to gaze at the stars.

See if I can spot the Big Dipper or other constellations in the sky.  It is kind of cool to see the moon, and all of its shapes.  Every once in a while you get an opportunity to check out a total lunar eclipse.  And you will get that chance this Sunday. 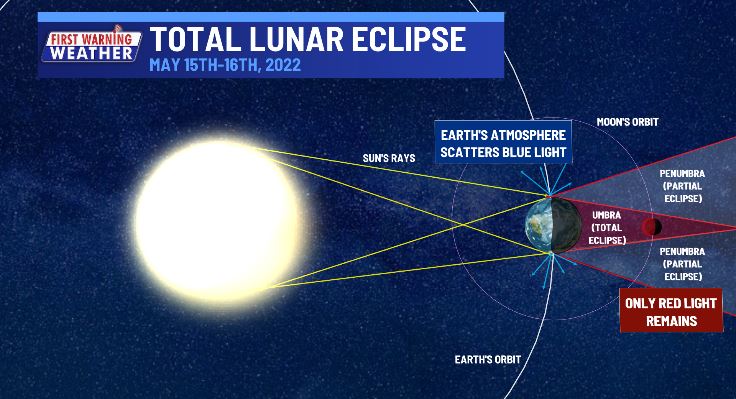 According to NASA, the moon will start entering the Earth’s partial shadow shortly after 9:30 p.m. ET on Sunday night. You’ll be able to see a slight darkening of the Moon at around 10:28 p.m. ET. The Earth’s full shadow will cover the Moon an hour later.  You can get more info HERE.

The forecast calls for isolated showers this Sunday.  A 30% chance, so hopefully the skies will cooperate and the sky will be clear enough for us to take a look at this.  You will have to be up a little later on Sunday night and into Monday morning.  Temperature wise, you should be in good shape.  If you have binoculars they will help, but a telescope would be better.  You should be able to get a decent view of it.  Good luck.

LOOK: The most expensive weather and climate disasters in recent decades

Stacker ranked the most expensive climate disasters by the billions since 1980 by the total cost of all damages, adjusted for inflation, based on 2021 data from the National Oceanic and Atmospheric Administration (NOAA). The list starts with Hurricane Sally, which caused $7.3 billion in damages in 2020, and ends with a devastating 2005 hurricane that caused $170 billion in damage and killed at least 1,833 people. Keep reading to discover the 50 of the most expensive climate disasters in recent decades in the U.S.

Source: There’s A Lunar Eclipse This Sunday. You Going To Watch It? Here’s How
Filed Under: Total Lunar Eclipse
Categories: Daily Distraction, Events, National News
Comments
Leave A Comment
It’s A Celebration of Food All February Long in Warrensburg & Johnson County
Wintry Weather Scrubs More Than 1,000 Flights In US
‘Laverne & Shirley’ Actor Cindy Williams Dies At 75
5 Misconceptions People Have About Missouri Plus One Extra
Missouri’s Getting A New Beer, Should Budweiser Be Worried?
Is It Illegal To Park On Your Lawn In Missouri or Illinois?
Jay Leno Breaks Bones In Motorcycle Wreck Months After Fire
Show-Me Bike Show Scheduled for February 4
Major Missouri Employer Takes Steps to Boost Minimum Wage